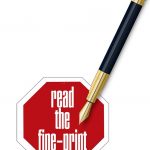 Where do I begin?

There are so many troubling aspects to the lengthy nondisclosure agreement that Republican presidential candidate Donald Trump is requiring online campaign volunteers to sign that I just had to speak up.

The contents of this 2,271-world nondisclosure agreement have come to light in recent days as the presidential campaigns ramp up their voter outreach efforts.

At this point, I will disclose I’m a Hillary Clinton supporter. But let’s set aside politics and just analyze this from a legal perspective. My complaints and concerns about this nondisclosure agreement come from my experience as a lawyer who represents executives in a variety of matters, including these types of legally binding agreements.

To sign up on the candidate’s website for the Trump Red Dialer, an online call system that connects campaign volunteers with potential voters, one first must first sign the nondisclosure agreement.

If you sign this far-reaching agreement, and you need to think long and hard about it before you do, you are prohibited from criticizing Trump as well as any member of his family for the rest of their lifetimes, not just during the campaign period. You also can’t comment critically on his brands or disclose any personal information about the candidate.

This non-disparagement requirement is just too ambiguous and broad. It states you cannot disparage Trump or any “family member,” which includes grandchildren and his nieces and nephews, or any of their companies. Try figuring out who all of these people and companies are – just try! Nor can you even disparage any of these companies’ products.

The definition of “confidential information” is a little over the top as well. It includes anything Trump insists is confidential, including his “political affairs” and other things that are clearly public.

Additionally, the non-compete and non-solicit is strange and unnecessary. The “no competitive services” clause is particularly troublesome; it requires the person to agree “not to assist or counsel, directly or indirectly, for compensation or as a volunteer, any person that is a candidate or exploring candidacy for President of the United States other than Mr. Trump and to prevent your employees from doing so.”  So much for changing your mind.

I could go on and on, but you get the idea.

Again, we’re talking about online volunteers here! A legal question to ask is what is the consideration – what does the volunteer get – in return for signing this broad agreement?  One guess is that it could mean they may get access to some type of confidential information. But that is neither promised nor even implied in the agreement.

In the business world, this would not fly.  Maybe Trump has passionate supporters who will sign anything just for the privilege of doing work for free.  But most companies will have to promise something, and limit the restrictions to those reasonably necessary to protect the business, for it to be enforceable.

Unfortunately, I think many volunteers will sign the agreement without getting any legal advice whatsoever. They support the candidate and they want to be part of the political process. Those are sincere goals. But in doing so, they also are making a lifetime promise that could someday prove to be problematic.