The situation now facing executives of the NFL – where negotiations between players and team owners appear to be stuck in a quagmire – mirrors in some ways what many executives across the United States confront on a daily basis.

What do you do when the corporate ship seems irrevocably headed toward an iceberg like a player lockout (or some other sort of work stoppage – be it a ban on off-shore drilling or a natural disaster like Hurricane Katrina)?

If you’re NFL commissioner Roger Goodell, according to Foxnews.com, you simply cut your pay to $1. FoxSports.com writes: 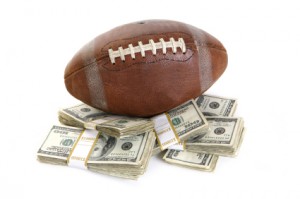 Goodell, who makes about $10 million a year including bonuses, said in a memo to his staff Wednesday (Jan. 26) that chief negotiator Jeff Pash will do the same. Pash makes nearly $5 million a year.

Goodell also has asked the league’s compensation committee to delay any bonus payments to him until after a deal is reached with the NFL Players Association.

Of course, the difference between a situation like the Katrina disaster and a player lockout is that NFL executives have a lot more lead time to prepare for a work stoppage. But there are lessons that many executives can take away from the NFL and its dispute with its players. In the case of the NFL, which faces a work stoppage in March when its agreement with players expires, management has already warned employees a worst-case scenario where pay cuts could affect large numbers of the NFL staff. In doing so, the league announced that it would make cuts from the top down. The NFL realizes, as should all executives, that employees ought to hear of these plans straight from the front office, rather than through news accounts, gossip or the Internet. And simply telling employees to keep a stiff upper lip during pay cuts probably isn’t the best plan to preserve employee morale and to keep valuable employees from walking away. Some HR experts recommend awarding outstanding performance with lunch with the CEO, a day off with pay, more flexible work arrangements or even a handwritten note remarking upon performance above and beyond the call.

Whatever the case, a work stoppage needn’t spell your company’s doom. Even if your product relies upon the handiwork of employees named “Ochocinco” and “Polamalu.”